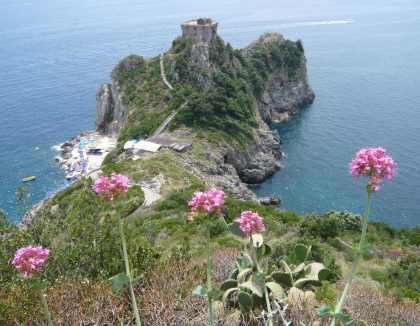 The magic of colors, scents , flavors , mixed in the crucible of the senses , every person who goes into the belly of this fascinating land .
Conca is an Italian town of 770 inhabitants in the province of Salerno in the Campania region in the middle of the Amalfi Coast .
The geographic basin-shaped like a Conc , with the addition of the name of dei Marini to detect the proximity to the sea and the vocation for the sea of his brave inhabitants, once numerous and experienced techniques of navigation, it hinges on the name , so that the country is also called the city of sailors.

The origins of Conca dei Marini is rather uncertain and it is believed a good chance that it was founded by the Tyrrhenians under the name Cossa and, given the steep and irregular shape of the hinterland , the first inhabitants devoted themselves immediately to maritime activities . In 481 BC was conquered by the Romans, who transformed it into a colony .
The small fishing village gave them a substantial contribution during the Second Punic War, and then rebel against during the social war of the first century BC
To be honest with prof.Liuccio " there is another Conca most beautiful and least known , the Conca from the road which goes down to the sea, the sky is arched to blaze horizon . It is the Conca of the convents and steps, flavors and fragrances , artisans and peasants in the custody of gardens that seem gardens. There is the Conca del Santarosa , where cloistered nuns invented the typical sweet of these parts,The Sfogliatella of Santa Rosa ,crispy puff pastry filled with custard.

Conca dei Marini is the land of pleasure.